Giovanna Pessi was born in Basel, Switzerland, and began playing the harp at age 7. At the age of 13, she began to play on an instrument by Erard, built in 1800. The experience with this historical harp, its light touch, and unique sound, motivated her to focus her studies towards early music and historical instruments. From 1993 to 1995, Giovanna Pessi studied the 18th century pedal harp with Edward Witsenburg in Den Haag. From 1994 to 2000 she studied early music and historical harps with Heidrun Rosenzweig at the Schola Cantorum Basiliensis, Switzerland. From 2000-2002, Giovanna Pessi studied with the Norwegian Lutist, Rolf Lislevand, at the “Staatliche Hochschule für Musik Trossingen”, Germany. As a soloist and accompanist specialized in early music Giovanna Pessi performed with musicians and conductors such as Rolf Lislevand, Konrad Junghänel, Philippe Pierlot, Harry Bicket, Nikolaus Harnoncourt, Marc Minkowski. Giovanna Pessi has participated in numerous recordings, amongst others she has recorded Georg Friedrich Händels harp concerto with the Ricercar Consort under the direction of Philippe Pierlot and a duo album with argentinian lute player Eduardo Egüez with music of G.Frescobaldi and other roman composers of the 17th century. From 2004 to 2010 Giovanna Pessi worked with Norwegian pianist and composer Christian Wallumrød, as a member of his sextet the Christian Wallumrød Ensemble she has recorded two albums for ECM records Munich; „The Zoo is Far“ and „Fabula Suite Lugano“. She has been exploring contemporary music on the baroque harp ever since. After appearing on several recordings of the label ECM Records Giovanna Pessi released her first own project „If Grief Could Wait“ on ECM Records in October 2011. 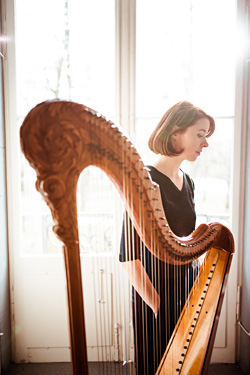